Is Ethereum Merge, the biggest blockchain upgrade,  priced in? – The Average Joe

Is Ethereum Merge, the biggest blockchain upgrade,  priced in? 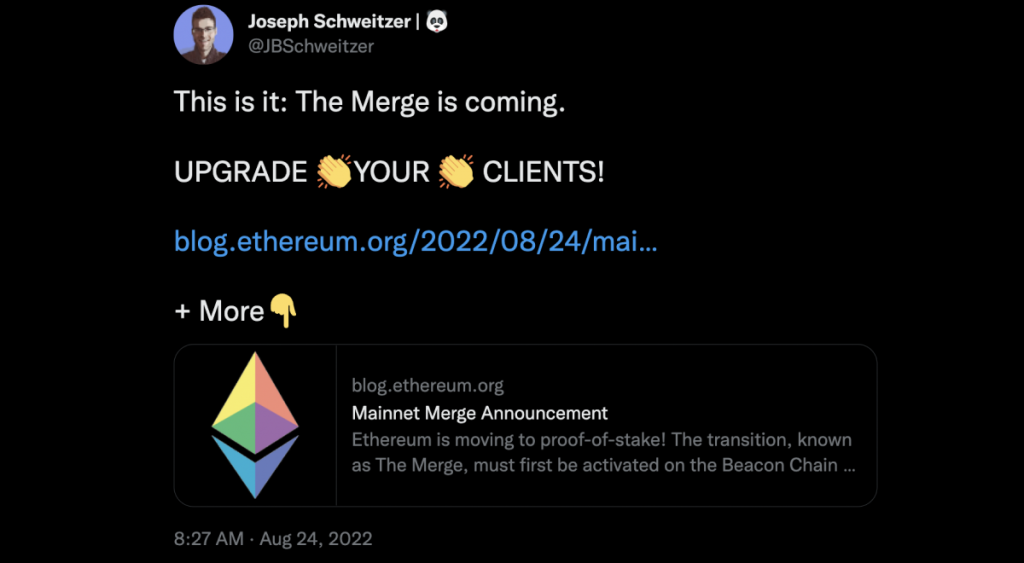 The biggest blockchain upgrade — the Ethereum Merge — is expected to arrive in three weeks ~September 15, with significant implications on $ETH’s price. It’s been tested on three test networks, and next up, the upgrade on the main network.

Is the Merge priced in?

We’ve already covered its potential impact on $ETH’s price here and here. Today, we look at whether the Merge is priced in.

What does it mean to be “priced in”? Here’s an example:

Ethereum is up 80%+ from its June bottom, but most assets have also gone up with signs of slowing inflation.

With the broad market viewing the Merge as bullish on $ETH’s already rising price, is the event already priced in?

1/ How many actually expect the Merge to occur? Many investors have been skeptical about the September Merge date — with the upgrade being constantly delayed for nearly six years.

2/ How much buying will come from mainstream media coverage? If not all investors believe the Merge will happen, how much FOMO buying will there be as we approach the date? A better question is how much institutional capital is waiting on the sidelines.

Investors: No shortage of Merge bulls

Director of Research at Arca, Katie Talati, thinks, “this is an event that a lot of people are undercounting, especially based on current price appreciation” (CoinDesk). Her bullish view is widely shared in the industry.

Ex-Morgan Stanley associate Hal Press has raised a $30M crypto hedge fund “almost solely” investing in Ethereum’s Merge. In this in-depth interview with Bankless, Press shares his thoughts on whether the Merge is priced in.