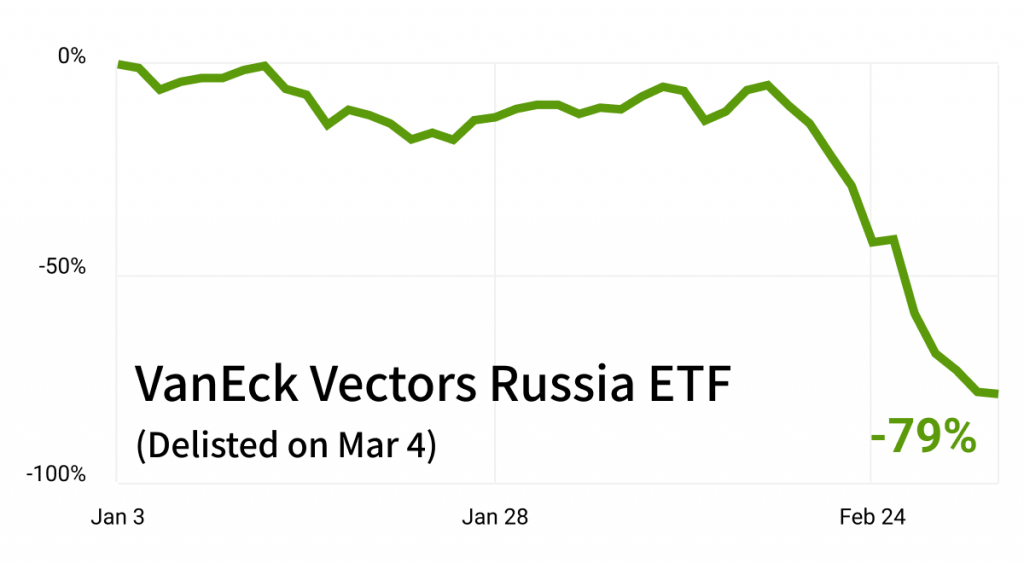 Those who bought the initial dip in Russian stocks are now finding them hard to sell — even impossible in many cases.

What’s the big deal? Russian stock markets have been shut down for over a week now — and Russian stocks and ETFs trading on global exchanges have dropped off a cliff since the invasion began.

Most Russian ETFs trading on North American exchanges have been frozen or delisted — some funds even starting to shut down. Here’s what it means for investors…

Those holding Russian assets may be forced to sell at very low prices — if it’s even possible — or risk them going to zero as per Cristian Maggio of TD Securities (via FT),

Pros got caught too: Even large investment funds are facing steep losses from buying the initial dip.

State governors have called on pension funds to sell all Russian holdings — which make up a small portion of their portfolio — i.e. California’s pension fund, Calpers, has less than 0.2%.

Nuclear war: In a research note, BCA Research assigned a 10% chance on a nuclear war in the next 12 months:

Hedge fund manager, Bill Ackman, warned (via CNBC) World War III has “likely already started” — but there’s still much more we can do before it escalates.