Adidas (ETR:ADS) finally dropped Kanye West after Ye made anti-semitic comments (hostility against Jewish people). Ye was also dropped by his talent agency CAA, Balenciaga, and JPMorgan, among others, in recent weeks.

Why did it take so long for Adidas to drop Ye?

The partnership had become too large for Adidas…

In the announcement, Adidas said it would “end production of Yeezy branded products” immediately. The news sent Adidas AG falling 5% — now down over 69% since July 2021.

Adidas was already struggling — losing to Nike in both the shoe and youth wars.

Earlier this year, the Business of Fashion surveyed 1,000 Gen-Zs on their favorite brands — but being a favorite doesn’t always lead to strong stock performance. 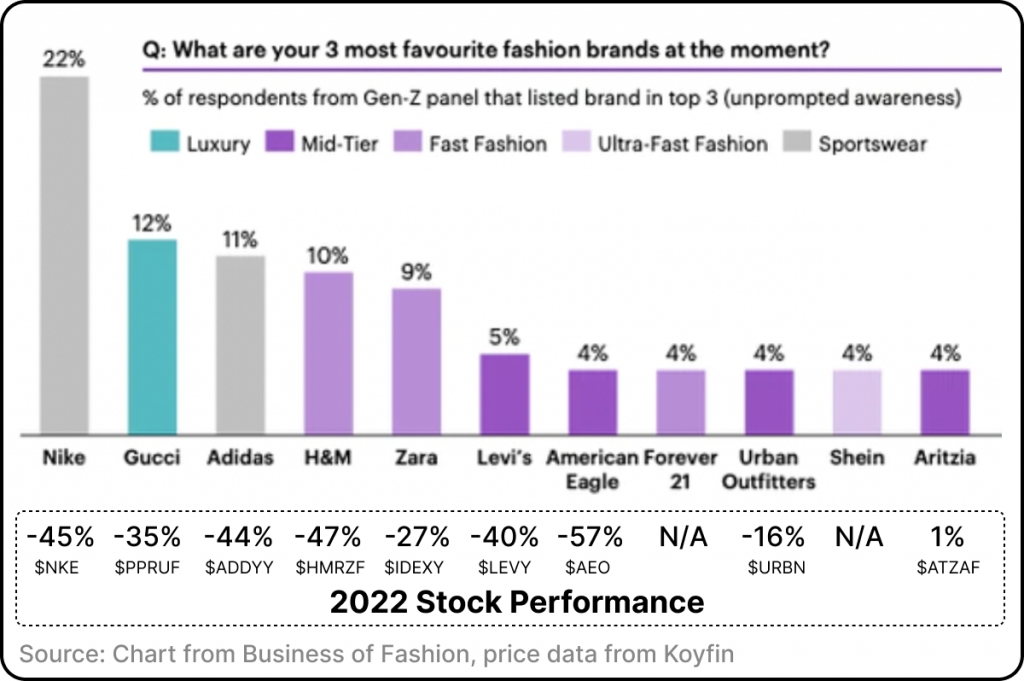 Can’t fault them when consumer discretionary brands tend to perform poorly leading up to recessions. And for many of these large brands, size and global exposure had become a disadvantage for the following reasons:

1/ Supply chains were a nightmare.

2/ Doing business in China had become too unpredictable.

3/ Foreign exchange (converting back to USD) is impacting earnings.

Vancouver (where’s that?) has managed to produce two outperforming brands (Canada, that’s where):

Crocs (NASDAQ:CROX) — another brand making waves with the younger generation, has begun to make its way back. The company has risen over 65% from its 52-week low after falling over 70%. Looks interesting; let’s bookmark this for another day.