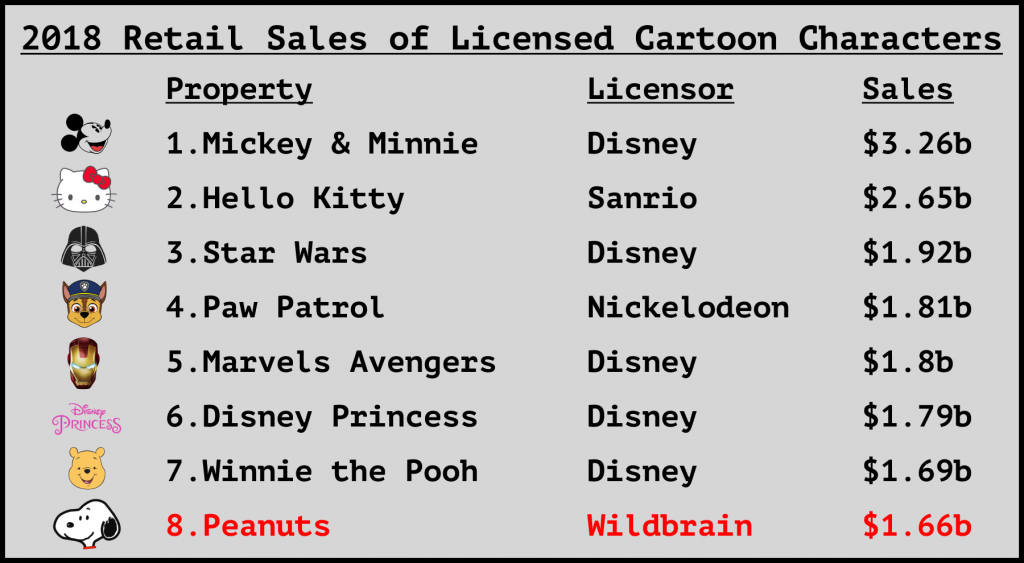 Don’t fix what ain’t broke. In the content space — redevelop it, push it out as new content and make billions from merchandise sales.

That’s the roadmap at Wildbrain, the global children’s media company that owns iconic brands like Peanuts (Snoopy), Sonic the Hedgehog and Teletubbies.

Wildbrain was originally named DHX Media before Eric Ellenbogen — the past CEO of Marvel Enterprise and a top exec at DreamWorks — was brought in to turnaround the company in 2019.

DHX experienced tremendous growth between 2010-2015 — its stock had surged over 11x. But between 2016-2018, growth had slowed and the company took out significant debt to purchase brands (i.e. Teletubbies) that didn’t work out — sending its stock down over 73%.

Peanuts was created in 1950 but the show today is still a household name 70 years later. Wildbrain purchased the Peanuts brand in 2017 which led to recent successes:

In content, the majority of a brand’s value is in selling high-margin consumer products. In 2018, Peanuts was the 8th most profitable licensed entertainment character — making $1.6b in merchandise.

In the fourth quarter of 2020, Wildbrain saw its first quarter of sales growth in 2020 thanks to licensing deals with Peanuts.

For investors… Support from Sonic and Strawberry Shortcake

For Wildbrain, Snoopy could become a big source of growth in its licensing business but it’s risky when your company relies on one franchise. To diversify, Wildbrain is focusing on its other franchises:

Another area of growth is Wildbrain Spark — the unit that runs Wildbrain’s advertising video on demand business on Youtube, Roku and other streaming services.

The growth in Wildbrain Spark’s digital advertising business and the growth potential of the Peanuts could be the catalyst to send Snoopy and Wildbrain’s stock to space.