Which companies will become WallStreetBets next favorite stock? — a look at the short squeeze of the decade – The Average Joe

Which companies will become WallStreetBets next favorite stock? — a look at the short squeeze of the decade 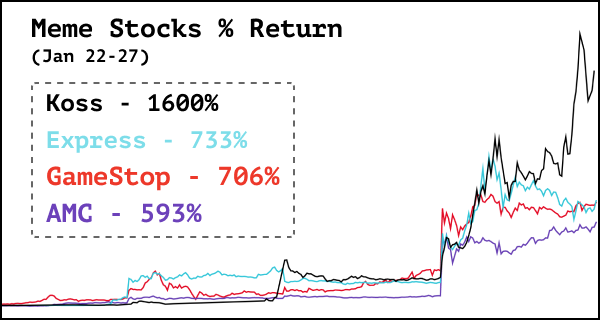 There’s a new investing strategy in town — and Wall Street isn’t going to like it — finding the next favorite stock on WallStreetBet, the infamous subreddit.

Over the past week, the entire world has seen the amount of wealth that could be created and destroyed through the power of community — that is WallStreetBets.

A recent surge in retail trading activity sent several sleeping stocks up as much as 10x. Here’s how it all started…

Don’t be on the wrong side of history

In 2020, an investment by Ryan Cohen into GameStop sparked a demand for the beaten-down video game retailer. Over the following 4 months, in a bet that Ryan Cohen will turnaround GameStop, thousands of traders on WallStreetBets piled into GameStop’s stock — sending it up over 77x.

But they didn’t stop there. In an attempt to find the next GameStop, traders bought up other struggling businesses including…

In a matter of days, WallStreetBets doubled its community members to 4m “degenerates” — signaling that the momentum has reached the public mass.

The craze also made its way globally, where even heavily shorted European stocks have risen.

Mother of all squeezes

Short squeezes occur when investors that have shorted (bet against) a stock, need to buy the stock back to cover their short positions. A large number of short-sellers covering their positions at once could lead to a large jump in the stock price. Short squeezes may explain part of the surge in the stocks listed above.

In 2008, Volkswagen experienced a short squeeze that sent its shares up 400% in 2 days — only to lose the majority of its gains over the next 2 months.

For GameStop, the squeeze was so strong that Melvin Capital, a hedge fund managing over $12.5b, lost over 30% of its fund on the trade.

For investors… Stay safe out there

Anything can happen in this market — be cautious, while fortunes could be made, it could also be destroyed by buying in at the wrong time.

While it’s highly unlikely that these companies will remain at their elevated levels, no one knows exactly how long they’ll keep rising for.

Avoid being the bag holder and only risk what you’re willing to lose.