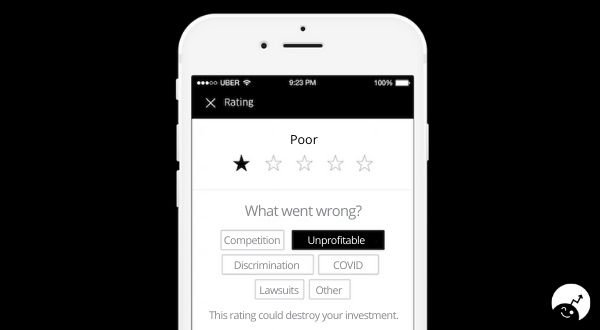 Founded in 2009, the company grew from a small startup to one of the world’s largest ride-sharing applications today. In 2017, the company’s founder and CEO, Travis Kalanick, was forced to resign after a series of discrimination and sexual harassment complaints. On May 2019, Uber went public at $42. Today, it trades at ~$31.

Driving in the wrong direction

Uber has been faltering with a highly unprofitable business model. The company is locked in a price war with Lyft to attract riders and drivers and spending billions on ride discounts and marketing. In an attempt to move away from ride-sharing, the company acquired Postmates, a food delivery service, on July 6 for $2.65b.

Uber and Lyft drivers are currently classified as contractors and do not receive minimum wage, paid leave or insurance benefits of a full-time employee. California lawmakers have been attempting to enforce rules to categorize drivers as employees since early 2019. On Aug. 10, a judge ordered Uber and Lyft ($LYFT) to categorize their drivers as employees in the state of California. Both companies are appealing the ruling which could increase ride-sharing apps’ expenses by 20-30% and tank both businesses.

Verdict: Uber gets a 1-star rating

Bradley Tusk, an early advisor to Uber, sold all his shares in Uber in late 2019 and warns that profitability for Uber looks bleak. His belief: as long as Uber competes with Lyft in the ride-sharing market, they will not be profitable.

The ruling will hurt the company in two of its most important cities: Los Angeles and San Francisco. Luckily, investors do not see this as a death sentence… rather a major setback to its plans to become profitable. With slowing growth, large losses and intense competition, Uber as an investment seems mediocre at best.