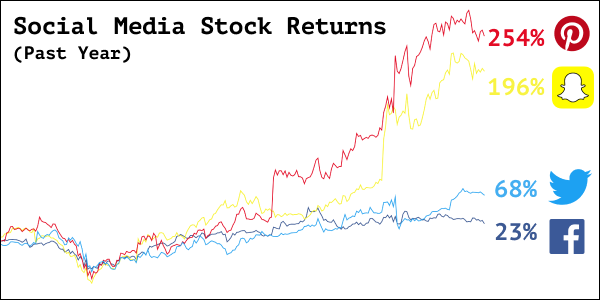 Welcoming your next podcast challenger, Twitter — who acquired the social podcasting app, Breaker, on Jan. 4.

Sike… This really isn’t a story about podcasts

Twitter’s plans for Breaker goes beyond podcasting. Twitter announced that it would shut down Breaker and move its team to work on Twitter Spaces — a live audio chat room inside Twitter which began beta testing in Dec.

Over the past 7 years, Twitter, the text-heavy social-media app, experimented with video and audio with little success:

Since its IPO in 2013, Twitter’s stock is up a mediocre 29% from its opening price. After its IPO, user growth slowed and Twitter failed to monetize its audience in the same way that Facebook did.

But Twitter’s fortunes took a turn in 2020 as user and revenue growth began to pick up from new initiatives:

For investors… Here we go again…

According to technology investor, Ram Parameswaran, only two things matter in an ad business:

Twitter’s doing all the right things but the company has taken investors on a rollercoaster ride for 7 years.

The concern for investors: How much of its recent growth in users is a result of consumers flocking to social media apps during COVID? Unless Twitter can prove that its user growth is here to stay, investors should be cautious of this turnaround story.