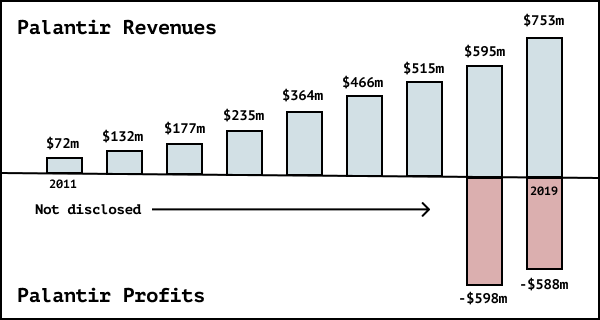 Palantir is one of the most secretive companies on the market — by design — with high-profile customers including the CIA and US Department of Defense.

But it’s not all hush hush after the company went public in Sept. — surging more than 190%.

Palantir’s road to becoming a public company was a long and political one. Founded in 2003, Palantir began working with the CIA to train its data analytics platform (Foundry) and expanded to commercial customers with its next product (Gotham).

At its core, Palantir’s products help large organizations analyze data to make better decisions. Since then, Palantir has grown into a behemoth valued at over $44b while generating over $1b in annual revenue.

With 47% of its 2019 sales from government agencies, Palantir is at the mercy of the US — limiting its customers to “the United States, its allies and in other countries abroad whose values align with liberal democracies”.

Here’s the nitty-gritty of Palantir — both good and bad…

In the past, Palantir benefited from little competition in the data analytics space. But that’s changed with the industry becoming increasingly competitive.

The key to Palantir’s advantage may be within its tech — which can be layered on top of any infrastructure in various applications/sectors. This is the reason why Palantir’s been able to:

Over the past decade, Palantir has grown its average contract value of its largest 20 customers by 20x.

The Bad: What keeps Palantir’s CEO up at night…

Long and expensive sales cycles haunt Palantir’s CEO — as it can take over a year to close a deal. This explains why after being 17 years in business, Palantir’s only got a little over 125 customers.

But these customers tend to be high-value customers — with 1 customer generating 12% of their 2019 sales ($743m). They’re also recurring and sticky — providing Palantir with a long-term revenue source while making it hard for customers to leave.

Palantir is massively unprofitable — losing $579m and $580 in the past two years. But with over $1.8b in cash, lack of profitability may not be an issue for a couple of years.

For investors: Despite large losses, growing margins and contract sizes could be the path to profitability — Palantir and its investors are here to play the long game.