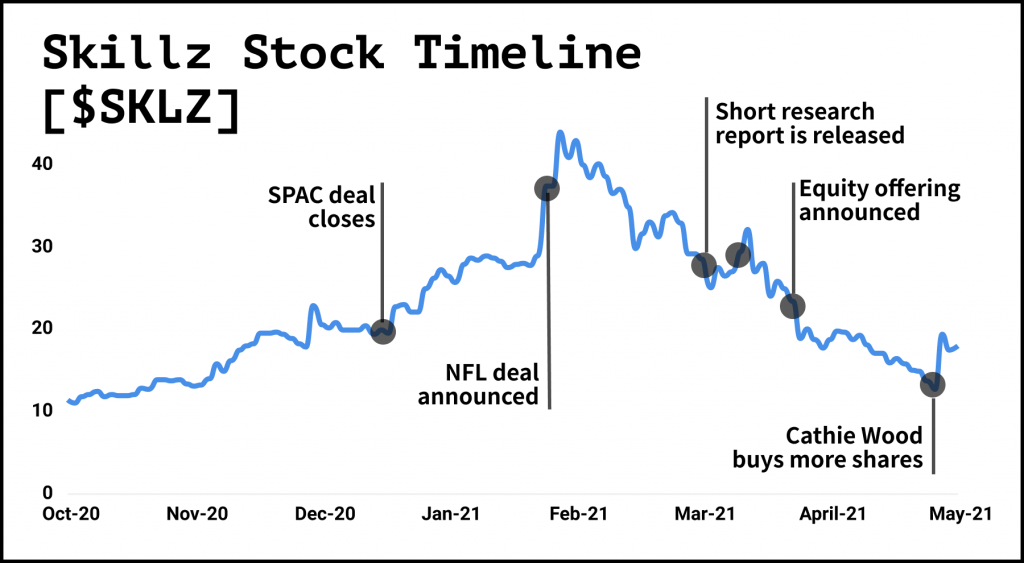 Diehard ARK Invest fans would follow Cathie Wood to the ends of space and now, they’re following her investment into Skillz — sending Skillz stock up nearly 60% in the past week.

Skillz is a mobile gaming platform with a twist…

… It doesn’t develop any games. Instead, other game developers use Skillz’s tools to add a competitive (eGaming) feature to their games.

Using its competitive feature, players can pay an entry fee to join games/tournaments and the winner receives cash prizes — while Skillz takes a cut of entry fees.

Skillz stock became one of the hottest and debated eSports (aka competitive gaming) stocks of 2021. But like many other companies in emerging industries, Skillz has its share of controversies…

Mobile game developers are dangerously prone to relying on the success of a few games and Skillz is no different.

This reminds us of Zynga, a mobile game developer — who generated the bulk of its sales from a few games (i.e. Farmville) in its early days. In 2011, Zynga’s stock fell nearly 70% after the growth of its top games slowed.

While Zynga had a whole set of other problems, this highlights the downside of relying on a few games for the bulk of sales.

Skillz Stock: For investors… Who should you believe?

Inside Wolfpack’s short report against Skillz, they outlined:

Despite these arguments, Cathie Wood added Skillz into her portfolio and even defended them — claiming Wolfpack’s allegations to be false.

True or false, Skillz is still a highly speculative stock. Recent actions have shown how volatile it can be and will likely continue to be.

Read more: Enthusiast Gaming ($EGLX), which went public in April, is also taking advantage of a surge in eSports