Silver jumps as retail investors look for the next short squeeze 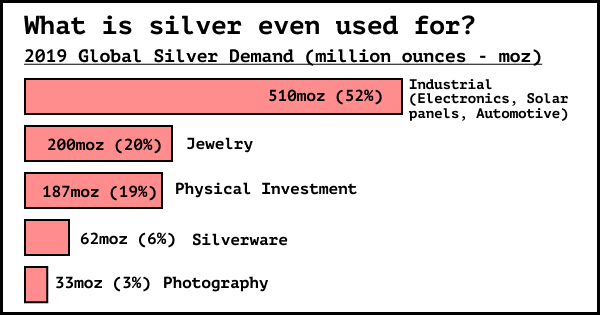 Last week, a WallStreetBets post started a rush to silver ETFs — pushing up the silver prices by over 15% to an 8-year high.

GameStop started the recent stock market mania and has since expanded into other investments. While WallStreetBets is still championing GameStop, other members tried rallying the community into silver and other stocks — claiming these as the next big squeeze.

There’s just one problem… The silver trade doesn’t fit the theme behind other meme stocks — of going against Wall Street and buying stocks that professional fund managers are betting against.

According to WSJ, hedge fund managers are betting in favor of silver and stand to benefit if silver prices go up.

But silver was already on an upward trend even before the retail buying — up 30% in the past 6 months. In 2020, silver benefited from

In 1979, three oil billionaire brothers pushed up the price of silver nearly 8x by buying up over 1/3 of the world’s private silver supply. Regulators stepped in to limit silver purchases which sent silver prices down over 50%.

These brothers were later charged with market manipulation and went bankrupt. This time, instead of 3 billionaires pushing the price up, it’s millions of retail investors.

But silver has completely different characteristics from meme stocks which make a short squeeze unlikely:

And according to analysts, very few investors have a large enough short position in silver to force a short squeeze.

Learn more: What is a short squeeze?

For investors… Silver losing its shine

Over the past week, meme stocks like Blackberry ($BB) and Koss ($KOSS) have fallen over 40% from their peak while several others are seeing similar losses — likely a result of investors taking profits. We could see a similar decline in silver prices as traders begin to take profits and interest moves on to the next “meme stock”.