Shopify defies the laws of COVID — continues to surge despite reopenings 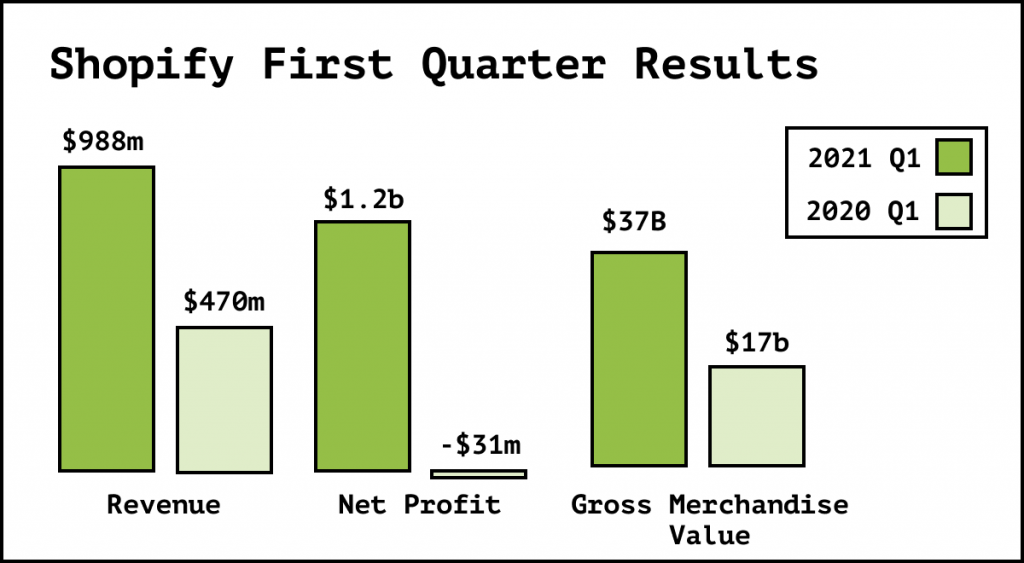 Shopify is defying the laws of COVID reopenings. Despite coming out of lockdowns, the e-commerce giant is showing no signs of slowing and even reported earnings that crushed all estimates — sending its stock up over 11%.

For brands, selling on Amazon has become a necessary evil:

Enter Shopify, the anti-Amazon, which empowers brands to create and run their online websites — powering some of the biggest brands (i.e. Allbirds, Sephora).

In 2020, Shopify’s sales and stock surged as online became the default way to shop — leaving investors wondering when growth would slow… But not this quarter…

Shopify reported earnings that crushed it by all metrics

The bulk of Shopify’s growth came from supplementary merchant services — which include payment, marketing and logistics services. This unit is also its largest revenue source (67%) and fastest-growing unit (137%).

What could propel growth? Shopify is planning to invest heavily in the 2nd half of 2021 and one focus could be on its fulfillment network. By working with warehouse partners, Shopify will offer services to store and ship their products. This could…

For the ARK fans: Cathie Wood told BNN that Shopify could one day be as big as Amazon, which is currently 11x larger by market cap.

For investors… E-commerce in a post-COVID world

Even in places that have opened up, Shopify’s president isn’t seeing any pullback in online spending. But other companies are already anticipating online spending to slow down.

On Wednesday, eBay ($EBAY) also reported strong earnings but gave a weaker forecast for the remainder of 2021 — sending its stock down 6%.