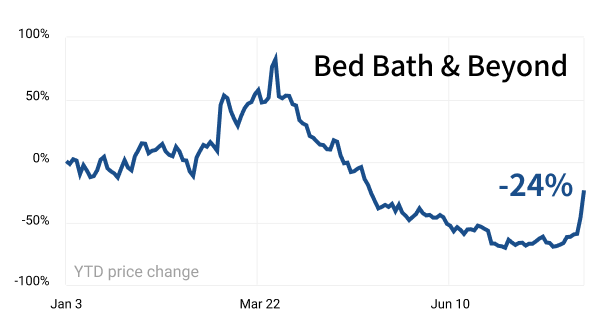 Did you think meme stocks were a passing fad? Think again. Two years later and investors are keeping the meme alive.

Bed Bath & Beyond Reddit talks are heating up — becoming the most discussed stock on r/WallStreetBets in the past week.

What’s the big deal? $BBBY is what every investing course warns you about. Sales are declining, market share is falling, and the company is burning heaps of cash.

They’re also having trouble finding a new CEO. Per Morningstar Analyst Jaime Katz — “it’s going to be tough to recruit someone” and “who’s going to want to run this?” (Bloomberg).

Instead of fundamentals, meme traders often look for stocks with:

Makes no sense: The rise of one little-known Hong Kong-based company may have sparked interest in meme stocks again.

Meme stocks are unpredictable, difficult to find and investing at the wrong time can be costly. We’ll stick with the boring but stable method of investing.