Profits or customer service? Here’s what Amazon investors are choosing – The Average Joe

Since its founding, Jeff Bezos has drilled the idea of customer obsession into Amazon’s culture. But Bezos is no longer at the company and with earnings declining, Amazon has a decision to make: more profits or better service?

Not what it used to be

Per Evercore ISI’s survey, Amazon’s satisfaction score has fallen to 79% from a peak of 88% (WSJ). Customers have noticed service deteriorating over the years, with common complaints being:

Amazon’s search has more ads, and maintaining quality is harder at such a massive scale. Still, Amazon has become a way of life for many.

With 200M+ members, Prime is the second largest subscription service globally. And Amazon does an incredible job keeping subscribers — retaining 98% of people who subscribe to Prime for at least two years (Amazon for life?).

But Amazon is about to make a lot less money…

Amazon had its most profitable period during COVID and doubled its employees in two years. But profit margins are expected to be cut by half this year compared to previous years. 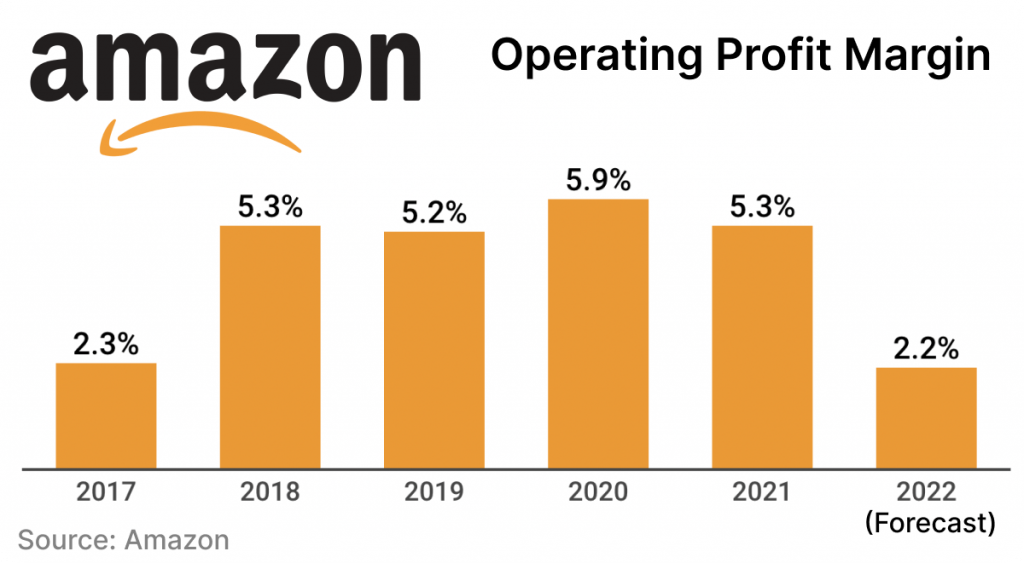 Even its highly profitable cloud division has slowed from a reeling tech industry. In response, Amazon is laying off 10,000 employees (~3% of the corporate workforce) and shutting down unprofitable divisions.

Amazon has a ~40% US e-commerce market share. But they also have several viable competitors like Walmart, Costco and other e-commerce platforms competing against it.

Walmart even launched its own subscription service in 2020 — which has racked up ~11M members.

Bought the dip: This hasn’t stopped more “superinvestors” from adding $AMZN to their portfolios after a nearly 50% drop from its peak.