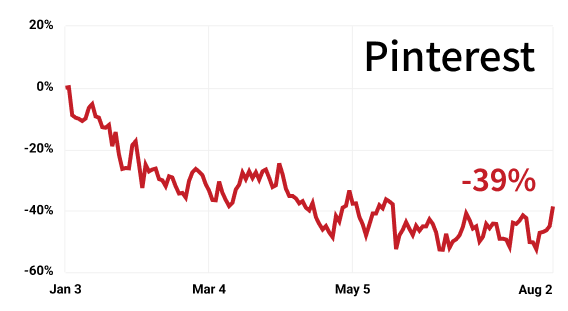 Pinterest reported a mixed earnings report, which sent its stock up 11.6% yesterday.

But its future is much more uncertain.

What’s the big deal? Pinterest (NYSE:PINS) is going through a major transformation — further pushing into shopping and e-commerce, a market many other social media platforms have tried with little success.

Social media influences buying decisions, but getting users to buy directly on the platforms is difficult. Unlike others, Pinterest says its users come with a shopping intent.

3/ User decline — which they blamed on changes to Google’s algorithm lowering traffic and competition from other platforms.

Late last year — PayPal showed interest in buying Pinterest— before PayPal shareholders killed the idea. Activist shareholder Elliott Management has a sizeable stake in both PayPal and Pinterest — and some think Elliott could push for an acquisition. But that’s pure speculation.