Oatly IPO comes after a massive 2020 for plant-based foods 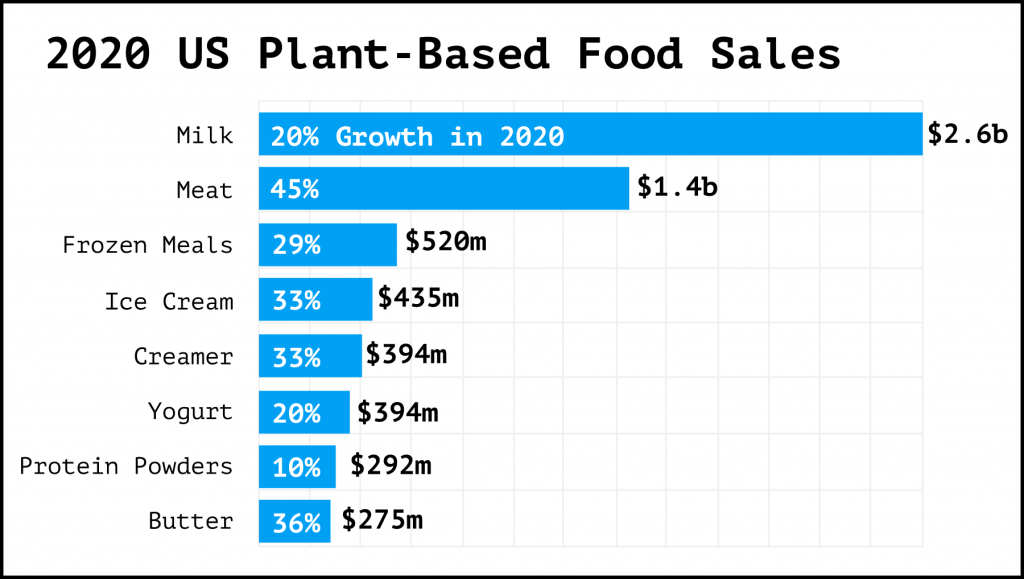 Outside of a knack for entertainment, what do Jay-Z, Oprah, and Natalie Portman all have in common? They all had the foresight to become investors in Oatly.

On Monday, the sustainable oat milk company filed to go public – the Oatly IPO could value the company as high as $10b.

Oatly IPO: There are udder alternatives to cow’s milk

Before Oatly entered the U.S. market in 2017, the demand for oat milk – a sustainable alternative to dairy milk – was practically non-existent. Its popularity has since skyrocketed to become the second best-selling plant-based milk in the U.S. behind almond.

Since then, the plant-based dairy industry has seen tremendous growth:

But here’s how you really know you’ve made it – when Starbucks ($SBUX) adopts your product into 15,000+ stores.

Plant-based alternatives are taking over

The jump in demand for plant-based alternatives has been so big that Dean Foods, once the biggest U.S. milk company, filed for bankruptcy in 2019 – citing a growing trend towards milk alternatives.

But plant-based milk isn’t the only plant-based product catching the eyes of consumers and investors:

For investors… Fight plant with plant

Despite the fast-growing adoption of plant-based foods, Oatly has some potential problems ahead of it. In the plant-based meat space, Beyond Meat is under pressure from competitors launching similar products and undercutting prices (i.e. Impossible Foods lowering its prices by 20% in Feb.).

Similarly, Oatly is at risk of running into similar issues as established food giants like Quaker Oats, HP Food and Pacific Foods launch their own oat beverages.

At a potential $10b valuation, its stock is looking expensive for a company making all its sales from one product.

Learn more: Beyond Meat is cookin’ up a global storm – but is anyone eating?