Nvidia, the world’s most valuable chipmaker enters the CPU market – The Average Joe

Nvidia, the world’s most valuable chipmaker enters the CPU market 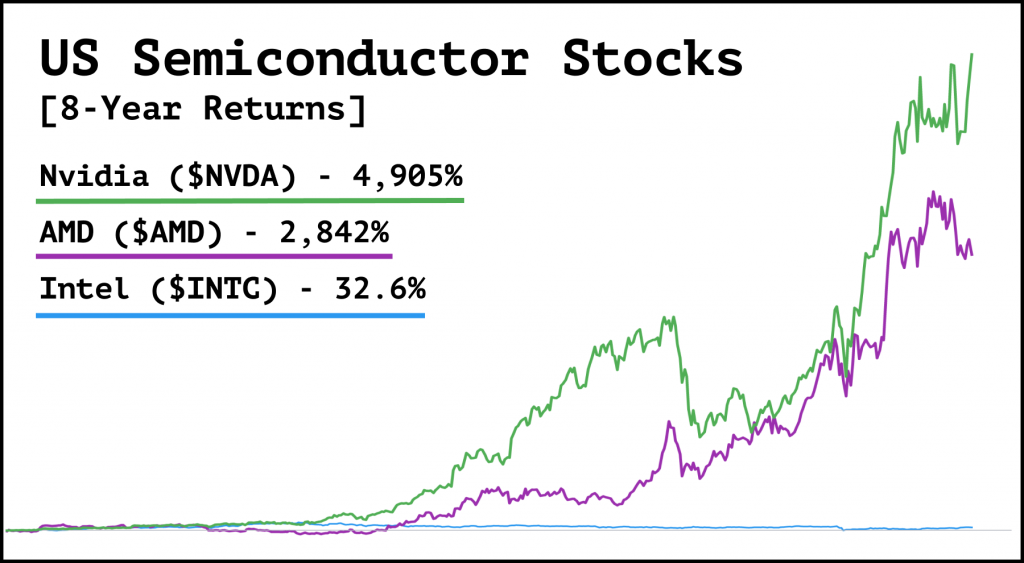 Intel might have some trouble processing Nvidia’s latest news… On Apr. 12, Nvidia, the world’s most valuable chipmaker, came out with 2 big announcements:

The news sent Nvidia’s stock soaring 6% and competitors, Intel and AMD down more than 5%.

In 2020, Nvidia overtook Intel, which once dominated the CPU industry, as the largest chipmaker in the world (by market cap). While Nvidia is historically known for its graphics cards, moving into the market for CPUs allows Nvidia to:

This puts further pressure on Intel, who’s already struggling to maintain its relevance after nearly 40 years at the top (can Intel return to its glory days?)

How to hype up your investors and scare your competitors?

By making announcements like these – a month before releasing earnings results in May – Nvidia:

Over the past decade, Nvidia’s CEO, Jensen Huang, made big, successful bets on some of the fastest-growing industries: gaming, crypto, data centers, etc. — sending its stock up over 28x in the past 6 years.

In 2020, Huang made his next move – acquiring ARM for $40b (deal is still being reviewed). If the ARM acquisition is approved by regulators, the deal could turn Nvidia even more into a powerhouse.

For investors… When they all want you to fail

While the deal is going through a long review process by regulators, industry tech investors are already anticipating the deal to be rejected.

But deal or no deal, Nvidia is expecting some big numbers in its May earnings report that could send Intel another reminder of who’s on top.