NIO day — how does the electric vehicle maker compete against other Chinese EVs? – The Average Joe

NIO day — how does the electric vehicle maker compete against other Chinese EVs? 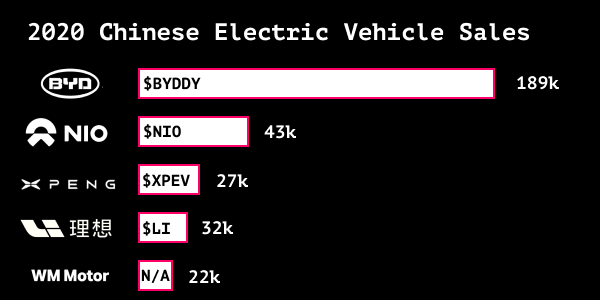 Carmakers like Tesla and NIO have created annual events like “Battery Day” and “NIO Day” to reveal big announcements, introduce new products and to hype itself up just enough to send its stock higher.

How NIO came back from the dead

In April, NIO nearly escaped bankruptcy with a $1b rescue-investment from investors. Since then, NIO has become one of the hottest EV stocks in 2020 — rising over 1,600% in the past year.

Despite selling only 17k cars in the third quarter of 2020, less than 3% of General Motors vehicle sales, NIO has become the third-largest automaker by market cap.

In JPMorgan’s views, NIO’s extreme valuation is justified by seeing it as a tech company with more growth opportunities including:

But there are two problems with this view:

A blessing and a curse

NIO operates in one of the largest and most competitive EV markets in the world, China — with over 400 domestic EV car makers (not including global competitors).

China’s EV market had grown from just 5% global market share to nearly 50% in 2019 — supported by its generous subsidies. But in April, China began rolling back these subsidies with two key changes:

For investors… Open the floodgates

Hundreds of EV startups have popped up over the past few years — many of which likely won’t survive.

One of the biggest threats to these startups is competition from existing carmakers, who are well funded and have existing manufacturing/sales capabilities to push out its own EVs.

Nearly every carmaker is planning to release an EV in the coming years — flooding the market with supply which could trigger a collapse in EV stocks.

Learn more: Here’s what you need to know about NIO before investing