Intel replaces its CEO — can the struggling company return to its glory days? – The Average Joe

Intel replaces its CEO — can the struggling company return to its glory days? 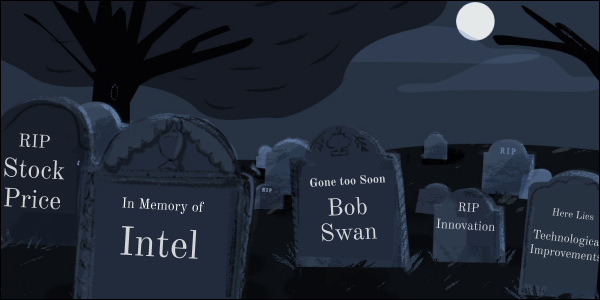 On Jan. 13, Intel, the chipmaker that powers most of the world’s PCs, announced the replacement of its CEO, Bob Swan.

Under Swan’s tenure, Intel’s stock had barely budged, the company lost several big customers but on a positive note, had successfully redesigned its logo.

The disruptor becomes the disrupted

Intel was once the gold standard in the semiconductor business. While many chipmakers chose to either design chips or manufacture them, Intel opted to do both — this gave them a decades-long advantage.

But this advantage slowly eroded as competitors that specialized in design or manufacturing, started developing better chips…

In a bold and risky move in 2018, Intel announced a new chip design that would’ve, if successful, become an innovative breakthrough. But it backfired…

Time to force some changes

On Dec. 29., Dan Loeb, a Third Point fund manager with a $1b position in Intel, called for big changes to Intel’s strategy. In his letter, Loeb had a few suggestions for Intel.

Pat Gelsinger, Intel’s new CEO, had once been the Chief Technology Officer of Intel before joining another software business as CEO. By bringing back a CEO with a technology background, investors hope to prioritize Intel on innovation and bring it back to its former glory.

Intel is still the largest American chipmaker by sales with profits of over $20b in 2019 — they’ve got money on its side but time… Not so much.

For investors… Get your turnaround on

According to Loeb, at its current pace of innovation and product release, Intel will lag further behind its competitors over the next 5 years. But turnarounds in the chip business can and do happen. In 2014, Intel’s competitor, AMD, appointed Lisa Su as CEO to turnaround the company and refocused AMD on its core businesses. AMD’s stock fell for 2 years more after its CEO came in, before surging 33x.

Trust the process? Product innovation in the chip business is risky and it takes 3-5 years to develop a product. Success requires understanding where the market is going and how competitors will respond. If Intel can get this one right, expect a big rally in its stock.