I Solemnly Swear That I Am up to No Good 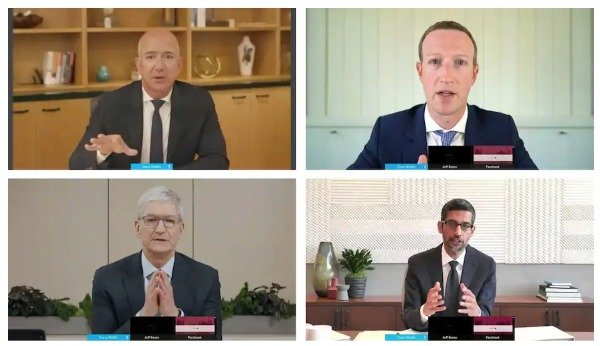 On July 29, the CEOs of Amazon, Apple, Facebook and Google took the center virtual stage in front of the US Congress. These companies were questioned for over 5 hours on everything relating to their monopolistic business practices.

Here’s where lawmakers fired their shots:

Amazon: Mistreatment of small businesses on its platform and Amazon’s use of data from independent sellers to launch and promote their own Amazon-branded products.

Apple: Unfair treatment of third party app developers on its App Store and the company’s policy to take up to 30% commission on in-app purchases. That aside, they got off lightly.

Google: Business tactic of displaying search results most profitable for itself, hiding conservative party’s content on its search engine and breaching privacy policies by combining too much user data throughout its ecosystem (e.g. Google Search, Google Maps, Gmail).

Facebook: Biased censorship of content, digital “surveillance” of its competitors, copying competitors’ products and scrutiny over Facebook’s acquisition of Instagram in 2012. Members of Congress argued that the Instagram acquisition was anti-competitive and should have never happened.

All talk, no action

The hearing was ultimately seen as theatrics that will lead to no immediate actions or consequences. Any regulatory action could take years to play out. That being said, regulators can prevent these giants from growing through acquisitions. These companies will face greater difficulty in getting approval to acquire other companies.

The finale: David Cicilline, head of the investigation, ended with closing remarks that left an ominous tone for these companies:

“This hearing has made one fact clear to me. These companies as they exist today have monopoly power. Some need to be broken up, all need to be properly regulated and held accountable. We need to ensure the antitrust laws, first written more than a century ago, work in the digital age.”