We’d say the chance you’re holding one of these is fairly high. At the start of this year, nearly 40% of stocks in the tech-heavy Nasdaq index were down over 50%.

Zoom, Shopify and Peloton are a few of the most popular COVID stocks that are down over 70%. They also have little guidance from past major crashes — all going public after 2015.

Forewarning: If you bought at the top, it could take a REALLY long time for your stock to break even (if at all).

What are your options? There are three: Hold, sell (and leave in cash) or sell (and buy something else).

1/ Hold. This works best if you’re invested in ETFs that track major indices like the S&P 500 or Nasdaq. It’s safe to assume these will recover at some point. When is anyone’s guess.

Where it gets tricky are individual stocks. Unlike buying an ETF, each stock has its own factors that impact its recovery time.

But if you’ve held on for this long, it could pay to hold on for a bit longer.

Here are the returns of major indices vs. select stocks that outperformed in the three years following the 2009 market bottom. 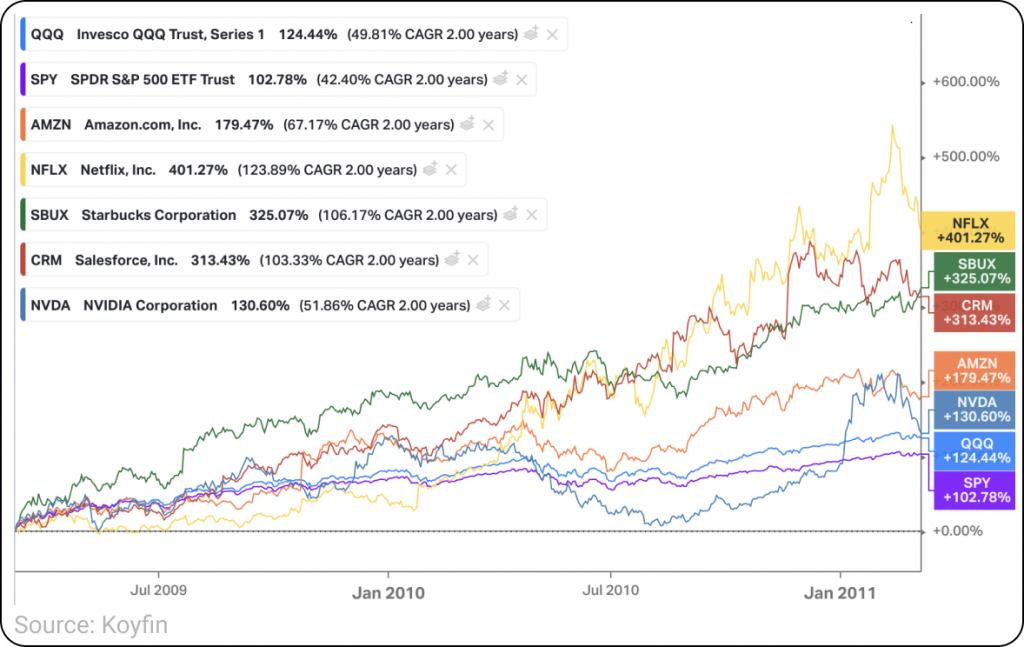 The tech-heavy $QQQ (Nasdaq) outperformed the $SPY (S&P 500). But many riskier assets outperformed by multiples.

Should you sell? Read on below.

Let’s look at the other two options:

2/ Sell (and leave in cash). TBH, this is one of the options we like the least. Cash may be king for now, but holding cash can be costly at the start of a bull market.

There’s another option rather than sitting on cash….

3/ Sell (and buy something else). This is one of the hardest and most time-consuming decisions to make. But often, it’s necessary.

Especially if a stock we’re holding turns out to be garbage. Many aren’t capable of getting themselves to sell something that’s down 70%.

While the second point may be true, holding on to a loser is an opportunity cost. As investors, we’re constantly looking for the best investments.

It doesn’t matter what you bought the stock at. What matters is the best opportunities currently available.

The Average Joe: “I prefer holding. Why? I’m lazy, and I hate trying to time the market.”