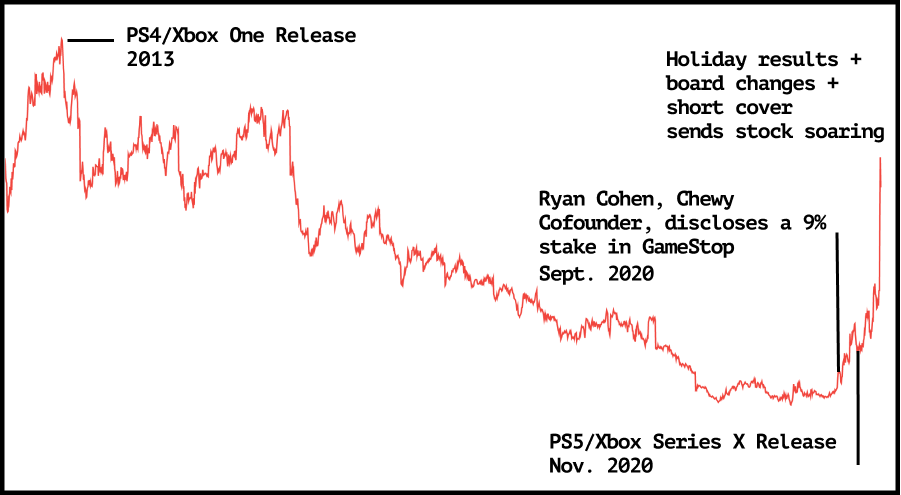 GameStop’s stock jumped nearly 100% after releasing holiday sales numbers and announcing a big change to its board:

Over the past 7 years, GameStop’s stock had steadily fallen over 92%. One man decided to give GameStop an extra life… In 2020, Ryan Cohen, who founded and sold Chewy.com for $3.1b, took a 9% stake in GameStop — later increasing its stake to 13%.

Alongside Cohen, the two other Chewy execs bring deep expertise in e-commerce, online marketing and finance — refocusing GameStop towards e-commerce.

How does console releases impact its stock? In 2013, when the older consoles, PS4 and Xbox One, were released — Gamestop’s stock had peaked right as the new consoles came out before falling 92% over the next 7 years.

Even the release of new consoles couldn’t save GameStop — who barely makes any profit on console sales.

The economics of console systems

With a manufacturing cost of $450 and a selling price of $499, not even the manufacturer, Sony, makes much money on the console — instead, they make their money on game sales. For the distributor, GameStop…

Sony and Microsoft are pushing consumers towards purchasing games digitally via online stores on the console. Game distributors are also being disrupted by new business models in the video game industry:

GameStop’s playing with a big handicap when it comes to competing against the largest tech giants.

For investors… Can 3 people save GameStop?

With the level of expertise amongst the former Chewy execs, It’s possible but it’ll take more than a focus on e-commerce:

Sales have fallen 29% over the past year and COVID lockdowns, which benefited the gaming industry, could be coming to an end.

Business turnarounds take a long time and are incredibly difficult to execute. If Cohen can pull this off, and it’s a big if, GameStop could finally reverse its decade-long decline.

Learn more: These are the two things GameStop is lacking to become a successful company…