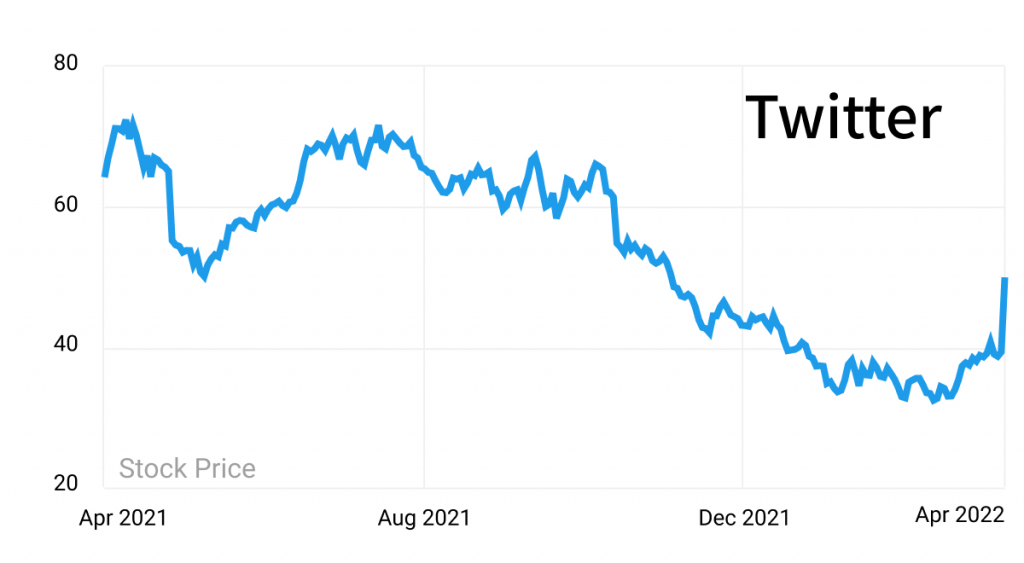 Elon Musk has taken a 9.2% stake in Twitter — becoming its largest shareholder and sending its stock up 27% yesterday.

What’s the big deal? Musk has social influence that rivals the President’s so when he gets involved with or tweets about a company to his 80M Twitter followers — the entire investing world tunes in.

Elon Musk — who’s been a longtime critic of Twitter’s product — may have found his next target:

Per Dan Ives (via CNBC) — Musk could get more aggressive, leading to a potential buyout. But for now, it’s uncertain what Elon Musk is doing with his stake.

Fixing Twitters’ problems: Twitter’s stock price has struggled since its IPO in 2013 under the leadership of Jack Dorsey — with its stock up just 16% since its IPO.

In hindsight, Twitter was likely overvalued with a $26B market cap after its IPO with only $317M sales the year before (82x price-to-sales).

Joining the meme game: Twitter mentions on infamous WallStreetBets jumped into the fourth most-mentioned stocks on the subreddit behind GameStop, Tesla and AMD.

Elon Musk is known for his market-moving tweets — including “Dogecoin is the people’s crypto” — with Dogecoin soaring in the months following. Now that Elon’s involved, Twitter could start trading like a meme stock — with unpredictable wild swings.