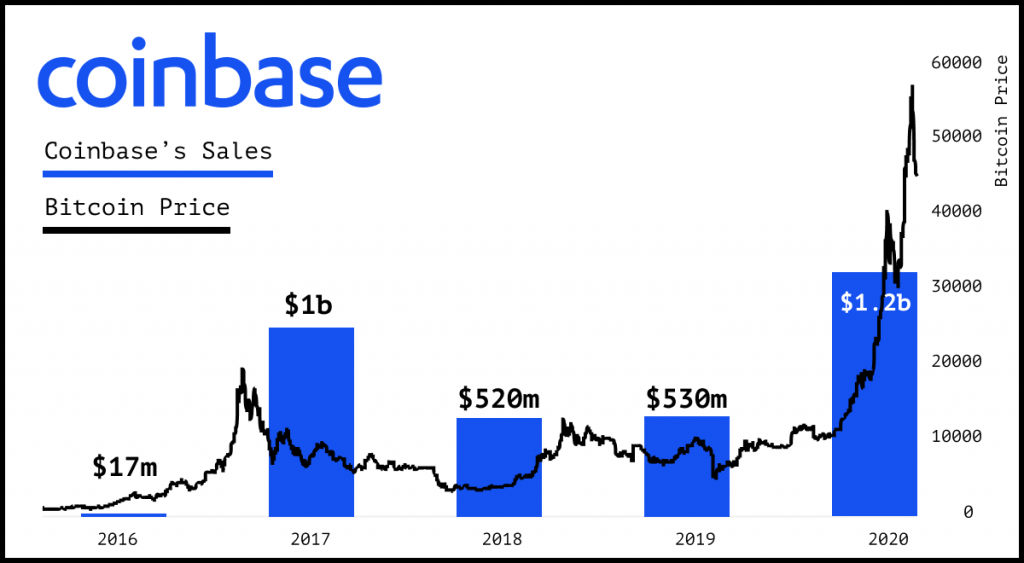 If financial reports were films, we might have an early Oscar contender in Coinbase.

This past Friday, in the process to go public, the largest cryptocurrency exchange in the U.S. released its S-1 filing – and they did not disappoint.

Shine the spotlight over here

Founded by Brian Armstrong in 2012, Coinbase is an online platform to buy/sell Bitcoin, Ethereum, and other popular cryptocurrencies. Popularized by its easy-to-use interface, Coinbase expects to go public via direct listing in 2021.

With Bitcoin up over 600% since the beginning of 2020, the decision for crypto exchanges was easy – it’s time to go public. In addition to Coinbase:

Ready for its close-up

Here’s a look at Coinbase’s numbers:

The company generates the majority of its revenue by taking a 0.5% cut of each transaction. The more cryptocurrencies people buy and the higher their price, the more Coinbase makes  – making its sales correlated with the volatile price of cryptocurrencies.

At the end of 2017, crypto prices crashed more than 70%. According to CoinTelegraph, Coinbase saw its sales fall by nearly half in the following year. If crypto prices fall, Coinbase could see a similar decline.

For investors… There’s always a critic…

And here’s what investors should be criticizing:

If Coinbase wants to avoid becoming an oscar flop, it’ll have to meet the high growth expectations on its business. And that ultimately depends on the enthusiasm surrounding cryptocurrencies.

Learn more: Bitcoin is going mainstream but investors are worried about these things…