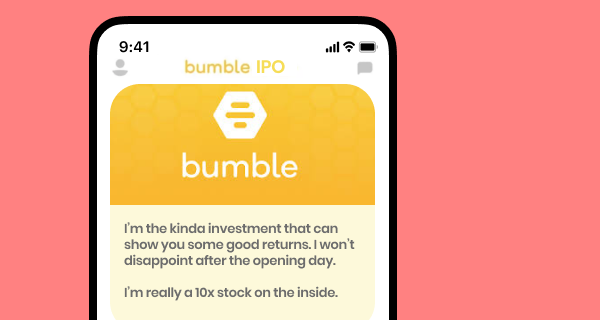 Everyone’s got skeletons in their closet — Bumble’s were exposed when they filed its IPO on Jan. 15. The popular dating app is expected to debut on the stock market before Valentine’s Day.

Only on Bumble to “make friends”

Bumble was founded in 2014 by Whitney Wolfe, who previously co-founded Tinder. Bumble operates the 2nd and 5th top global dating apps in Aug. 2020 — Bumble and Badoo.

But Bumble is where the company really shines — which made up 56% of the company’s total revenue with sales growing 70% in 2019. Bumble differentiated itself from other dating apps by letting women initiate the first move after matching with another user.

Business model: Bumble and Badoo are free to use with premium-subscriptions and in-app premium features available for purchase. In the first 9 months of 2020, both apps had:

Whenever a private equity (PE) firm is involved in a transaction, there are reasons to be cautious. In 2019, private equity firm (caution), Blackstone, took a controlling stake in Bumble.

PE firms are notorious for buying majority stakes in companies, loading them with debt and using their cash to pay dividends — rewarding the PE firm at the expense of the company.

According to Bumble, the majority of the cash raised from its IPO will be used to pay off debt and buy back shares from previous investors.

Why is this bad? Companies commonly use IPOs to raise money to grow — in Bumble’s case, the majority of the cash won’t be used to fund future growth but instead, used to pay off the debts taken to reward previous investors.

These are a lot of things that could scare an investor off but one of the biggest might be an ongoing rivalry with Match Group ($MTCH), the world’s largest dating app provider who owns Tinder, Hinge and other popular dating apps.

After Bumble declined several acquisition offers from Match — Match turned to suing Bumble and launched features similar to Bumble’s “women make the first move” feature. Match doesn’t like taking no for an answer so don’t expect them to let this one go.

Bumble’s expected to go public at a $6-8b valuation but given the risks, investors might be better off swiping left.