AMC raises nearly $1b — just in time to prevent a bankruptcy 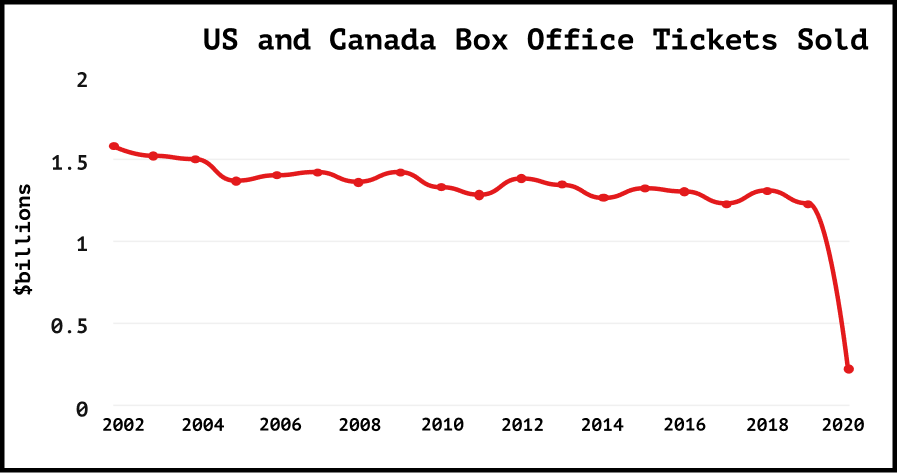 There’s a fire in the theater but no one’s running out… Why? Because no one’s inside them.

Don’t count on Wonder Woman to save theaters…

Over the past 17 years, ticket sales in the US and Canada have slowly declined from 1.57b in 2002 to 1.23b in 2017. Theaters made up for the loss by nearly doubling its ticket prices over the same time period.

AMC, the largest theater business in the US, had its already struggling business further impacted by COVID.

But theaters saw a sign of hope… Wonder Woman 1984, released on Xmas day, brought in $16.7m in its opening weekend.

How far can $1b really last?

If these habits don’t reverse, theater sales may never move back to their pre-COVID numbers. Even if AMC can survive this, their balance sheet won’t be pretty.

They’ll be left paying massive amounts of interest on their $6b+ debt load. In the third quarter of 2020, AMC paid out $83m in interest, more than it made from admissions. They also owe $450m+ in rent to landlords.

For investors… Can you trust this recovery?

AMC burned ~$125m per month near the end of 2020. At this burn rate, if theater attendance doesn’t recover, AMC has enough cash for 7-8 months.

Even if theaters recover, it’s possible that their stocks might not. Investors will get a clearer picture of AMC’s recovery on its next earnings report — released on Feb. 25.