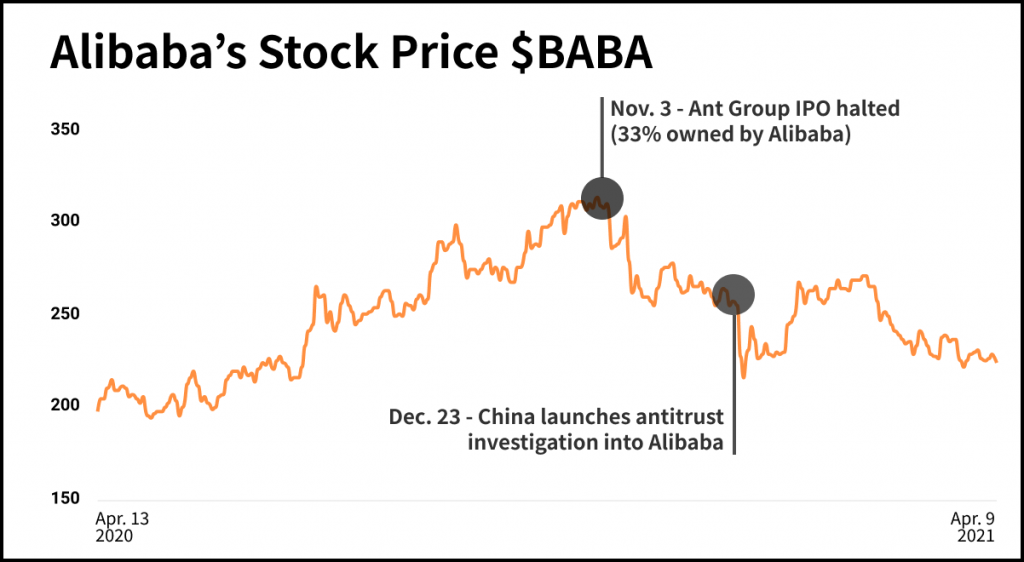 On Apr. 9, Chinese regulators fined Alibaba $2.8b for its anti-competitive business practices (i.e. forcing merchants to sell exclusively on Alibaba). Investors were relieved to see investigations on its business coming to an end — sending Alibaba stock up over 9%.

The third series in a trilogy is almost always the worst — but this time, Alibaba’s managed to break the rule.

The fines on Alibaba, the largest e-commerce company in China, comes after a months-long antitrust investigation — which kept its stock down over the past 6 months. Here’s how It all started:

Any news is better than no news for Alibaba stock

Despite the fine, Alibaba stock jumped for two likely reasons:

But according to FT, the worst is far from over… Alibaba’s bigger challenge will be fending off competitors:

For investors… On to the next problem

The result of the antitrust case could have several long-term implications on Alibaba’s future growth and profitability:

But there’s still uncertainty remaining — the future of Ant Group. In addition to Alibaba, Chinese regulators also went after Ant Group. Alibaba’s stake would have been worth over $100b upon Ant Group’s anticipated IPO. Since China halted the IPO, the value of Alibaba’s investment has fallen by nearly a third.

Ant Group is also going through a restructuring that will turn it into a financial holding company overseen by China’s central bank — a change that will significantly limit its growth potential and also the value of Alibaba’s stake in the business.

Learn more: Chinese tech firms are still under regulatory threats and these are the risks.