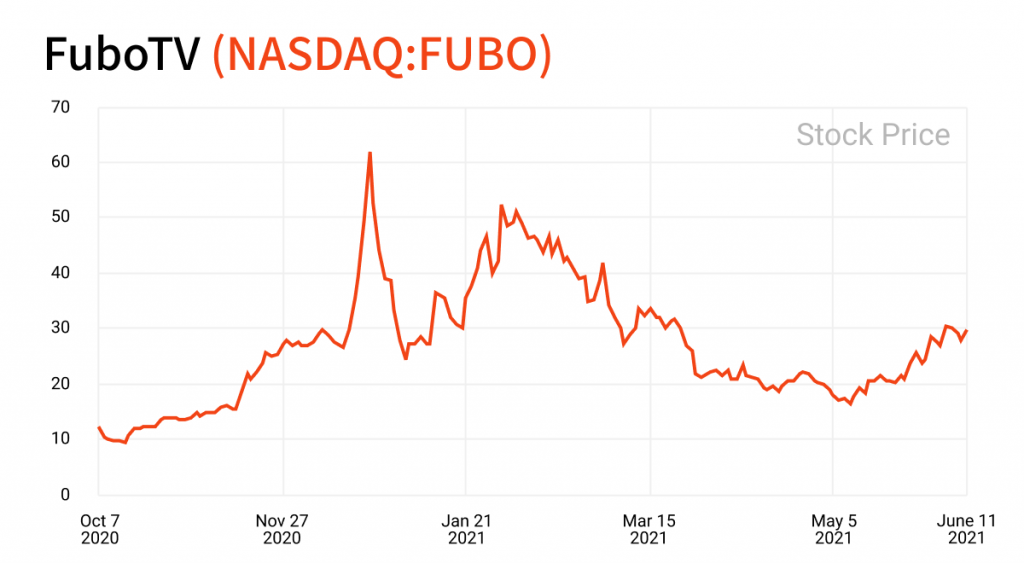 fuboTV is a sports TV streaming platform with live sports, news and entertainment in the US/Europe market. 3 trends are driving the growth of fuboTV stock…

Fubo is spending an enormous amount of money on content and now it’ll have to prove that it can grow subscribers.

What about FuboTV stock performance? After its IPO, Fubo’s stock rose nearly 5x over 4 months. But growth stocks began crashing in Feb, and Fubo was down 65% by May.

What’s happening in the industry? Sports have always been slow to move towards streaming. But in the first 5 months of 2021, several sports leagues announced major deals to bring their content to streaming platforms.

Broadcasting rights with the NBA are expiring in the coming years and more streaming deals could be coming — which means: more sports are making their way to streaming.

That gives Fubo more opportunity to load up its content to attract subscribers. For many sports fans, having access to specific sports is a dealbreaker when it comes to choosing a sports streaming platform.

Why now? Fubo is riding a wave of momentum and delivered an incredible 2021 1st quarter earnings:

Very strong quarter all around. And thanks to the Feb growth stock correction, Fubo is trading at nearly half its peak price.

What’s the upside? FuboTV stock has several growth opportunities ahead:

Sports betting makes a lot of sense for Fubo. Sportsbooks like DraftKings and FanDuels pay big money to acquire customers. In Fubo’s case, having access to customers through their streaming platform would provide them with a big advantage over competitors.

At a ~$4b valuation, FuboTV stock isn’t as expensive as other sports betting stocks and even other high-growth streaming platforms. Considering FuboTV is expected to make $520-530m in 2021 — double what its 2020 sales — its valuation is reasonable… If you can overlook its lack of profitability…

What are the risks with FuboTV stock?

Streaming is highly competitive and the vast number of streaming options could make it harder for Fubo to attract customers in the future. Unlike Netflix, which moved towards creating its own content, Fubo will always be at the mercy of high-cost sports content with its current sports focus. It’s also unlikely that we’ll see Fubo making a profit for years to come.

Investors: For those with lower risk tolerance, this one isn’t likely for you. If Fubo can execute, the upside could be big given its current valuation and industry growth.