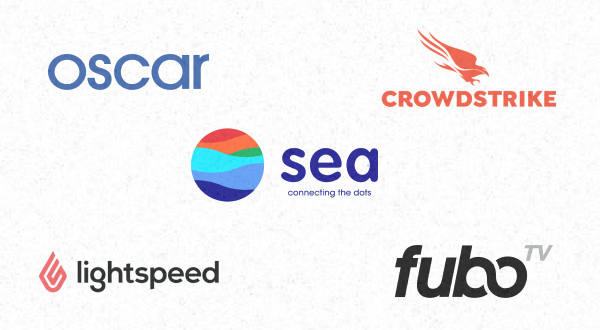 Company overview: Sea is the most valuable company in Southeast Asia — operating a gaming, e-commerce and financial services company.

What makes Sea interesting? Sea operates in one of the largest and fastest-growing sectors — e-commerce. It’s also the dominant player in the interest Southeast Asia market

More growth ahead: At the time of writing, Sea is nearly a tenth of Amazon’s size but the company is still growing at a rapid pace. In its recent quarter, sales growth accelerated to 158% in the recent quarter — a tremendous growth rate for a company expected to make nearly $10b in sales in 2021.

Company overview: CrowdStrike is one of the largest and fastest-growing US cybersecurity companies — which has achieved a 70% year-on-year growth rate for 14 consecutive quarters due to its superior technology and faster sales cycles. CrowdStrike has designed a low-friction sales process that can close large enterprise deals in a short period of time.

More threats ahead: In the past year, a hack on SolarWinds and a similar vulnerability in Microsoft’s email application left over 18,000 and 250,000 organizations exposed to cyberattacks.

FuboTV — The future of sports betting and sports media

Company overview: FuboTV is a sports TV streaming platform with live sports, news and entertainment in the US/Europe market. Fubo was founded in 2015 as a soccer streaming service but pivoted to offering other sports and other major cable channels in 2017.

All eyes on its sportsbooks: For investors, the most interesting part of Fubo’s story is its potential interactive sports streaming service — which has already received regulatory approval in several states — and is expected to launch in 2020.

Depending on its reception, the sports betting service could accelerate subscriber growth, increase revenue per user and give it a competitive advantage against other streaming services.

Lightspeed — The Canadian tech darling growing at the speed of light

Company overview: Canada-based Lightspeed provides point of sale and e-commerce software to services and retail businesses. The company was founded in 2005 and has been on an impressive growth streak in the past few years — growing its presence throughout the US and Europe.

Growing with acquisitions: When it comes to Lightspeed, there’s one big thing you need to know about it, it’s highly acquisitive. Lightspeed has completed over 13 acquisitions — spending more than $1.2b acquiring 3 companies in 2021 alone. The company has seen significant sales growth using this strategy — which expands its product offering, geographic regions and opens it up to new markets.

The bigger opportunity: But the interesting narrative behind these acquisitions is the direction they’ll take Lightspeed in. While Lightspeed is known for helping restaurants, retail stores and other hospitality services digitize their businesses (i.e. digital payments, online inventory management), its recent acquisitions will help it expand further into e-commerce — which opens it up to a much larger market opportunity.

In 2021, acquired Ecwid, which has the 14th largest share of the e-commerce software market, giving it more firepower to go up against Shopify — one of the leading companies in the e-commerce space.

But making big acquisitions is only one part of the job. Being able to integrate these different businesses and extracting value out of them is where the difficult part begins. And if it fails to do this, Lightspeed could struggle with growing losses.

Oscar Health — An insurance technology company in the early innings

Company overview: Oscar Health is a health insurance company built on a technology platform for a better customer experience. Unluckily for Oscar, the company went public at the height of the insurtech bubble in March 2021. Since then, its stock has fallen over 40% along with other insurtech companies like Lemonade and Clover.

Can technology win? Oscar Health is trying to win the market by providing a better product and service. The US healthcare industry is the largest and most expensive of any developed country. It also ranks among the lowest of any industry for net promoter scores — a gauge measuring a customer’s experience and the likelihood of them referring the product to someone else. With an NPS score of 30, Oscar stands out in an industry with an average of ~0.

With only 560k members, Oscar is still in the early stages compared to the largest health insurance company in the US, UnitedHealth Group — which has over 70 million members.

The Medicare opportunity: Enrolment in the United States’ Medicare Advantage plan has accelerated over the past decade — with 2.1 million people joining in 2020. This is the highest number of new enrolments in the past 20 years and these members are up for grabs by companies like Oscar.

As a growth company in its early stages, Oscar is losing millions each year with a focus on growth over profitability. It lost $406 million in 2020 but the company has a large cash balance of $2.3b supporting it.

Oscar is a high-risk, high-reward investment in a massive industry that’s ripe for digitization. In its current state, Oscar still has a lot to prove out to investors but the market potential makes it an interesting one to keep an eye on.