Canada caved into the pressure of slowing growth – The Average Joe

Canada caved into the pressure of slowing growth 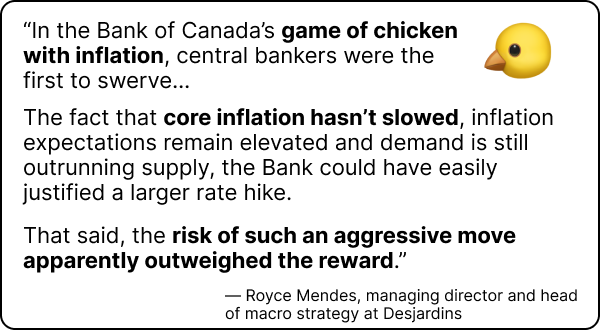 Yesterday, the Bank of Canada (BoC) raised its benchmark interest rate by 0.50 percentage points — following a 1 and 0.75 percentage point raise in the past two meetings.

Inflation is guiding decisions on how much to raise by:

Economists expect the rate to land at 4% by year-end — pausing at 4.25% in January for them to re-evaluate.

But the US isn’t likely to chicken out

The Fed faces a similar decision in their upcoming meeting next week on Nov. 2. The consensus is another 0.75 percentage point hike.

The dangers of raising too much: Economists are warning about a rapidly slowing housing market and potential economic collapse. We also have Jeremy Siegel blasting the Fed about interest rate hikes.

Still, the Fed isn’t likely to back down this time. They’re looking for “clear and compelling” evidence of inflation moderating before pausing rate hikes. And they’re willing to send the US into a recession to do it.